March 2021 marks the 10th anniversary since the start of Syria’s devastating conflict. Throughout the month we will be reflecting on this decade of brutality and inhumanity and reminding you that with no indication of lasting peace, the conflict in Syria is far from over. Displacement, violence and suffering continue to wreak havoc on the lives of millions.

Today civilians inside Syria still struggle to find safety and shelter as they continue to face violence and airstrikes. Hospitals and schools continue to be targeted, destroyed or repurposed. The healthcare and education systems have been left fragmented, overstretched and unable to cope. Food prices have soared to new heights, increasing 236% year-on-year resulting in 9.3 million people becoming food insecure with a further 2.2 million are at risk. 2.6 million people are in desperate need of clean water, a basic human right. 80% of those affected by the conflict are women and children.

Across the border in neighbouring countries, millions of Syrian refugees live in extreme poverty, battling hostilities with host communities, unable to work, existing in a state of statelessness. 5.5 million Syrians have been made refugees since the conflict began, feeling the lasting effects of PTSD and war-related injuries in makeshift camps.

This dark milestone serves as a reminder to the world that the lives of millions of Syrians depend on the support of others. The people of Syria should not be forgotten. We urge everyone to learn from the heartbreak of the past 10 years to support the future of Syria and protect the young lives who have known nothing but war. For millions of children in Syria, this is not their history, this is their future.

How Has the Conflict Affected the Syrian People?

What are we doing?

10 years of displacement, violence and suffering

Over the last 10 years, Syria Relief and other organisations have been on the ground delivering emergency aid, addressing humanitarian needs, supporting healthcare, education, and livelihoods for millions of people in need.

We have called on all military actors to cease violence and asked for the protection of innocent civilians and we will continue to do this until a resolution is found. Once it is over and peace returns, we will support the healing and rebuilding of the country, but the end is not yet in sight. 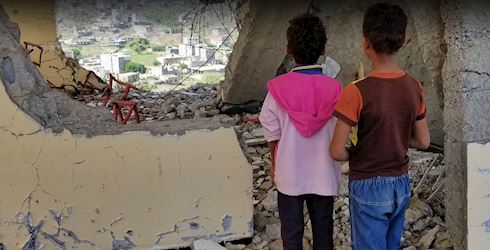